Fog: The Key To Flavour

Each winter, the flatlands of the Bassa Parmense are lost in a grey whitewash, their fumära, or fog. Rolling off the banks of the Po, it can get so dense that on some of our visits, we can barely see a few meters, and some of Italy’s most ordinary landscape suddenly shifts and finds its character. Culatello di Zibello originated back in the Middle Ages in response to this fog and there is perhaps no other salumi, which is, to taste, so unusually a product of its environment. As Massimo Bottura would say: ‘It isn’t meat, it’s myth.’

Viewed objectively this environment is very problematic for curing. Prosciutto, or bone-in ham is impossible here because of the humid climate. So instead culatello was born: requiring a whole prosciutto, but only using its most prized muscle. With the bone and rind removed, the bone cavity is first given an antiseptic treatment of wine, garlic and salt to protect it from spoilage and then the whole culatelli are rolled in sea salt from Cervia. They stay in salt in a fridge for 3 days before being rinsed in white wine and tightly tied into a pig’s bladder. A wooden paddle studded with needles is used to pierce the casing and allow any trapped air or moisture to escape. From now on no artificial temperature control is allowed and the culatelli are aged in cellars where the only regulation is via a single, north-facing window that is opened to allow in the fog that comes off the Po. More than one window would create currents and at the least sign of a breeze the window is closed. During the rare times that the weather is windy or there is no humidity, shutters are locked and floors dampened but generally the fog maintains a stillness and keeps temperatures in a steady range. Culatello di Zibello can only mature in old buildings with wooden beams, brick walls and floors of old terracotta tiles, its moisture and texture entirely protected and fed by the air and the unique microbiome of these cellars. 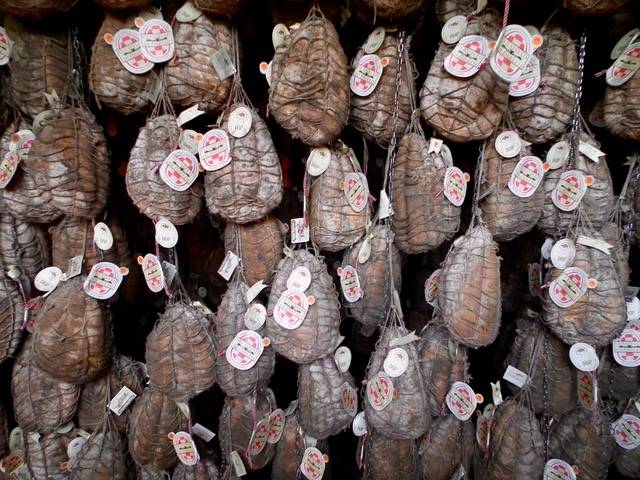 Culatelli di Zibello DOP is aged naturally, with no temperature control. At Podere Cadassa, a single window is manipulated to let the Parmense fog in.

The moulds that grow in these cellars, fed by the fog and uninhibited by any artificial environment, are unique. Hence why the true Culatello di Zibello DOP may only be made within the eight historic municipalities and by a handful of artisans in this small area of marshy land reclaimed from the flood plains of the Po (culatello from other regions is just culatello). Bologna university research has found over 1,000 different mould species in these cellars, thermophilic (warm climate) cultures rather than the mesophilic (cold climate) cultures that act on Parma ham. Through their microscopic root systems, these moulds, which are incubated by the fog, create the particular musky sweetness of the meat through enzymes and airborne yeasts. Like wine, Culatello di Zibello has vintage years, and the best are when there is plenty of fog.

Today, our culatello comes from Podere Cadassa where the Bergonzi family makes 7000 culatelli a year. All are aged for a minimum of 18th months, and up to 2 years. We receive both. Unlike other hams, Culatelli aren’t just ready when their ageing process is complete. Marco Bergonzi and his norcini Mario, Riccardo and Lucciano, will need to remove the internal stitches holding the Culatello together, soak it in wine and water for 24 hours to re-hydrate, before removing the bladder and finally wrapping the meat in a wine-soaked cloth. The swaddled culatello is left for 48 hours to allow the meat to absorb the moisture. This highly intricate process finally through, the best way to eat the culatello is on its own. It can deal with the limelight… 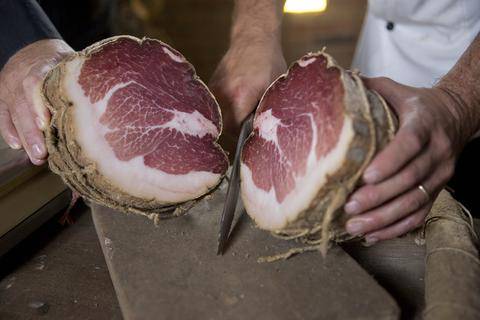 Culatello being opened at Podere Cadassa.

Waste Not, Want Not

For centuries the Italian mezzadria system of tenant farming ensured that culatello remained the well-kept preserve of wealthy Bassa Parmense landowners but clever methods of preservation ensured that the peasants, having given the culatello as a tithe, could still eat a small quantity of meat all year round.

After the slaughter of the pig in November/ December the first salame to mature was Strolghino, the small, fresh sausage that is aged for just 20-30 days and made using the trimmings from the culatello. When this was finished there was Salame Gentile, which takes its name from the piece of pig equipment Italians call gentile and we, less poetically, call the rectum. This thicker casing is made of 2 layers with a coating of fat in between and importantly protects the meat within. Thus, despite its narrow diameter, this salami can be aged for up to 6 months without becoming too dry.

And after the Gentile came Mariola, the most highly prized of the Bassa’s salami. It is named after its casing (mariola in local dialect) and mixes cuts from the shoulder, the coppa and the ham with a small quantity of honey used to kick start the fermentation process. The casing is the caecum, a pouch from the large intestine that in herbivores is important for the break-down of cellulose. From each caecum just one fat, knobbly Mariola can be made and, due to its size, can be hung for a year. This is the salami that was traditionally saved and eaten the following Christmas.

This evolution of different recipes in symbiosis with different parts of the pig’s offal is ingenious, and like pasta shapes and pasta sauces, fillings and casings go together for a reason. With the rise of industrial casings made from collagen or cellulose, not only is this connection increasingly forgotten, but the essential moulds are compromised. There’s still hope: 30 years ago Culatello di Zibello, this esoteric king of salume, looked set to disappear in a world of stringent sanitary norms (fog-free curing rooms) but has made its comeback. With increased knowledge Strolghino, Gentile and Mariola can too.