The Art Of Smoking

We are no stranger to meat cooked in smoke. From Basque grill to barbecue, the world and its melting pot (London), have shown us just what smoke can do for a piece of meat. But if there's no shortage of people telling us how live fire cookery is having its renaissance, another marriage of meat and smoke remains lost to sight.

Smoking, that old art of preserving fresh meat shares few of the associations of purity, flavour complexity, truth to origin that we bring to live fire cookery. Instead, we likely draw on a historical memory of smoked foods tasting broadly of smoke; and whose natural aroma is smothered under a blanket layer of ‘added’ flavour. Certainly, since synthetic smoke is increasingly used as a commercial trick for making processed foods taste of something, this association has some truth.

But is this the whole story? Well, not quite.

Smoking’s hard-core reputation derives from its historical use as a preservative. Back before salt was widely available, and before temperature control, smoke was used full-strength to prohibit microbial growth, slow oxidation of fats and development of rancid flavours. As such, it was not used lightly. But today, the landscape has changed, smoke is no longer necessary to make foods safe. And where authentic wood smoking is still found - as with our producers - it is often found differently, there for different reasons. 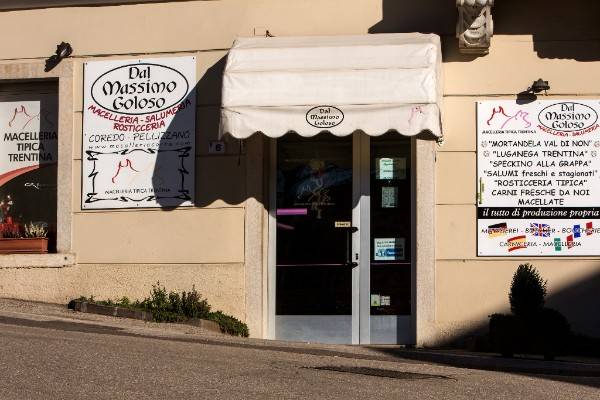 Mortandela, the salami shaped like a meat patty, is a smoked regional specialty in the Val di Non.

SMOKE: BEYOND PRESERVATION Unshackled by considerations of safety, producers like Massimo Corra in the Val di Non and Clotilde and Candido Passamonti in Le Marche are left free to explore what smoke can say about flavour and terroir.

For both, smoking is primarily about capturing the aromatic potential of wood - rather than the ‘smoked’ flavour which can taste so processed. The woods that they burn are ingredients - like spices or herbs - and choice or blend of species is critical and completely personal. Massimo Corra deliberately dampens his seasoned wood so that it burns at a lower temperature, for example, so as to preserve the delicate flavours of the wood. (At higher temperatures, the flavour presence of smoke is more pronounced.)

For the Passamonti siblings, who do not use a smoker, but keep a fire burning in the ancient hearth of their ageing room, the smoke is even more delicate - an element of environment like the mountain air, which Candido conducts by opening and shutting the window. The fire imparts no characteristic smoked flavour to the aged hams. But it is vital for maintaining correct humidity (which impacts on texture) and the bay and rosemary impart a trace of musky spice to the meat. 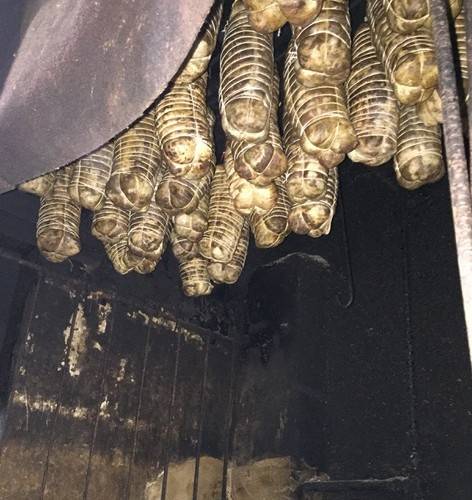 Salame hanging inside the ancient hearth of the Passamonti ageing room. 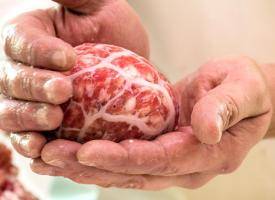 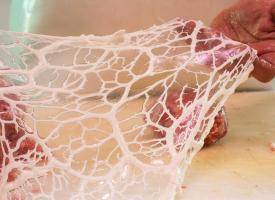 Mortandela shaped by hand and wrapped, or bound in caul

MORTANDELA: SMOKED IN THE VAL DI NON Massimo Corra makes speck, schiena, coppa and mortandela, all of which are smoked. But perhaps the most curious and unique is the Mortandela, a autumnal salami in the shape of a patty, bound by caul, which can be either sliced, chopped like pancetta into risottos, soups and stews, or fried. Its flavour is highly distinctive - the result of the smoking it receives for 12 hours over citrusy juniper and sweet chestnut.

Once, this regional speciality was made from cheap cuts like heart and lung, and was a test of skill for the norcino in rendering its texture free from sinew and gristle. Today, Massimo uses prime cuts of pork, the belly and the shoulder. The mortandela can be eaten either fresh (as Corra does, like a sausage) or aged. We receive ours at 30 days old, the smoke more mellow and the salame now perfect for slicing and eating with pickled vegetables or sauerkraut. 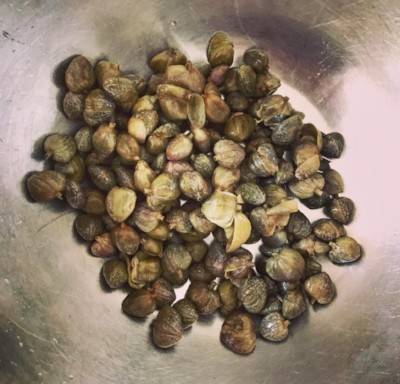 Capperoni after soaking
WE have received our first delivery of highly prized, salted Salina capers from Azienda Agricola Roberto Rossello. Unlike North African capers, Salina capers are known for their unusually high number of petals which makes them particularly firm and meaty. Their complex, aromatic flavour is drawn from the island’s rich, volcanic soil.

They are harvested by hand, usually by the women of the local villages, who start picking at 4am to escape the heat. They are then dried in a cool place to prevent opening, and sorted into two sizes - the 7mm diameter puntine capers and the capperoni capers which reach up to 14mm diameter. Puntine are delicate and best for salads and need just 20 minutes soaking in cold water; Capperoni are for cooking, but should be added at the end, after 45 minutes soaking. Both are available now.
Filed in: blog, ham & cheese, mortandela, smoked salumi, Smoking
Share:
Share on Facebook Tweet on Twitter Share on LinkedIn Pin on Pinterest
Previous article Sustainable Mediterranean Anchovies From Anzio